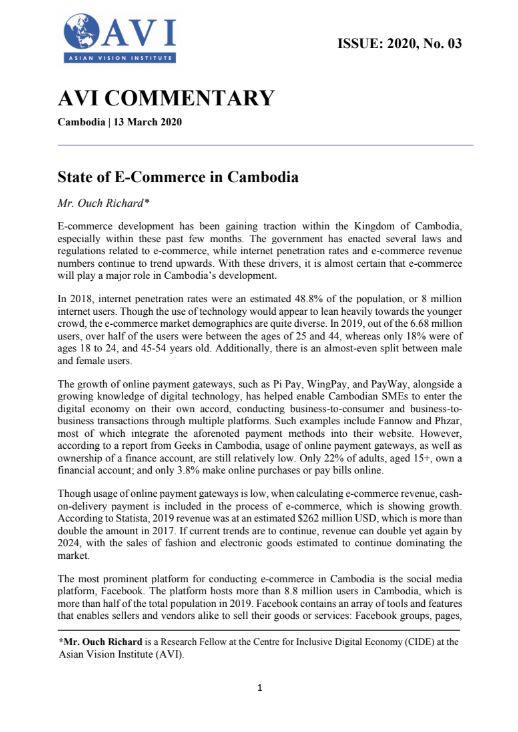 State of E-Commerce in Cambodia

E-commerce development has been gaining traction within the Kingdom of Cambodia, especially within these past few months. The government has enacted several laws and regulations related to e-commerce, while internet penetration rates and e-commerce revenue numbers continue to trend upwards. With these drivers, it is almost certain that e-commerce will play a major role in Cambodia’s development.

In 2018, internet penetration rates were an estimated 48.8% of the population, or 8 million internet users. Though the use of technology would appear to lean heavily towards the younger crowd, the e-commerce market demographics are quite diverse. In 2019, out of the 6.68 million users, over half of the users were between the ages of 25 and 44, whereas only 18% were of ages 18 to 24, and 45-54 years old. Additionally, there is an almost-even split between male and female users.

The growth of online payment gateways, such as Pi Pay, WingPay, and PayWay, alongside a growing knowledge of digital technology, has helped enable Cambodian SMEs to enter the digital economy on their own accord, conducting business-to-consumer and business-to- business transactions through multiple platforms. Such examples include Fannow and Phzar, most of which integrate the aforenoted payment methods into their website. However, according to a report from Geeks in Cambodia, usage of online payment gateways, as well as ownership of a finance account, are still relatively low. Only 22% of adults, aged 15+, own a financial account; and only 3.8% make online purchases or pay bills online.

Though usage of online payment gateways is low, when calculating e-commerce revenue, cash- on-delivery payment is included in the process of e-commerce, which is showing growth. According to Statista, 2019 revenue was at an estimated $262 million USD, which is more than double the amount in 2017. If current trends are to continue, revenue can double yet again by 2024, with the sales of fashion and electronic goods estimated to continue dominating the market.

The most prominent platform for conducting e-commerce in Cambodia is the social media platform, Facebook. The platform hosts more than 8.8 million users in Cambodia, which is more than half of the total population in 2019. Facebook contains an array of tools and features that enables sellers and vendors alike to sell their goods or services: Facebook groups, pages, and the marketplace. Sponsored ads can also be purchased, displaying an advertisement of their choice or linking straight to the business’s page. Livestreams are commonly used, where products or services are advertised and sometimes sold live to hundreds or thousands of viewers. Some transactions are made through Facebook messenger, where buyers and sellers perform the transaction, albeit usually paying with cash-on-delivery.

On November 2019, the government enacted two major laws pertaining to e-commerce in Cambodia: The e-commerce Law, and the Law on Consumer Protection. The e-commerce Law reportedly “regulates domestic and cross-border e-commerce activities in Cambodia, establishes legal certainty for electronic transactions, and enacts a number of important protections for consumers”, whereas “The Consumer Protection Law establishes rules to guarantee the rights of consumers and to ensure that businesses conduct commercial competition in Cambodia fairly.” These laws setup the legal foundation for e-commerce to truly flourish, offering a safety net for both consumer and sellers alike. However, until these laws are put into practice, e.g. a court dispute between a seller and buyer within social media or other online platforms, it is difficult to gauge how effective they will be.

It is without a doubt that e-commerce will become a mainstay of Cambodia as the country develops further into the future. However, cash remains the primary source of payment, as digital literacy and trust in online forms of payment remain a challenge. Despite these hurdles, e-commerce market indicators, such as internet penetration and revenue numbers, are expected to continue its growth well into the future. The government has also acknowledged this with their own efforts to add robust and forward-looking regulations. 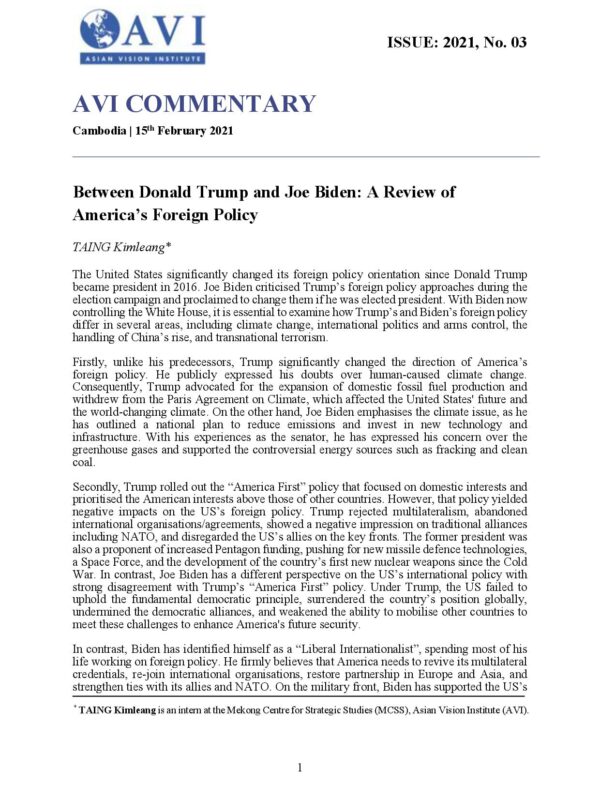 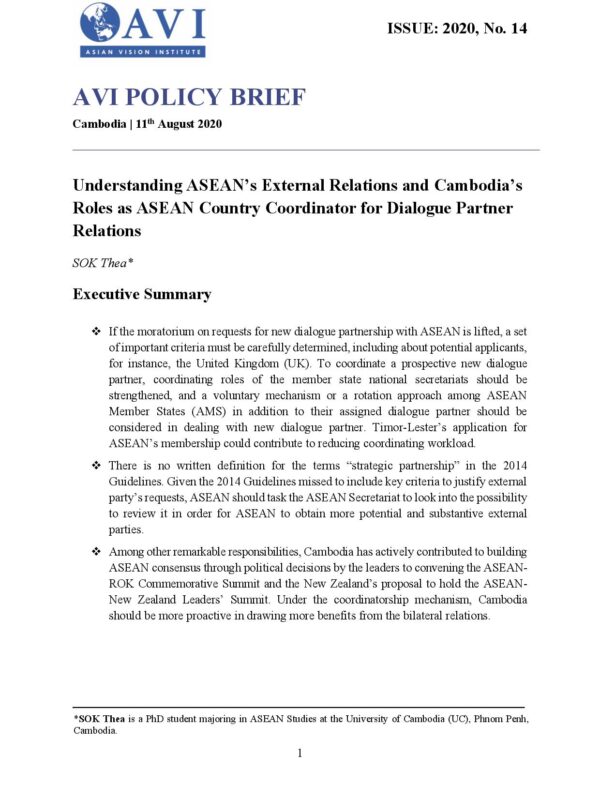 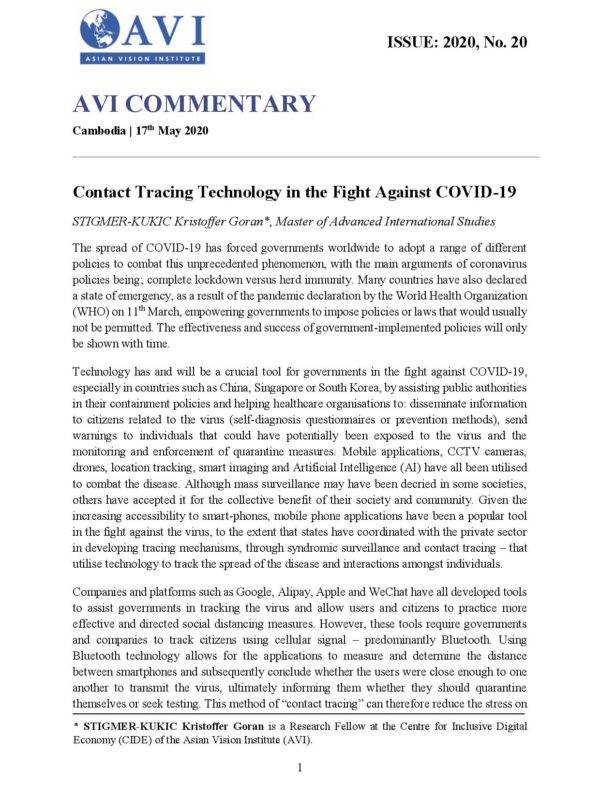 AVI COMMENTARY ISSUE: 2020, No. 20 | Contact Tracing Technology in the Fight Against COVID-19

AVI COMMENTARY ISSUE: 2020, No. 20 | Contact Tracing Technology in the Fight Against COVID-19 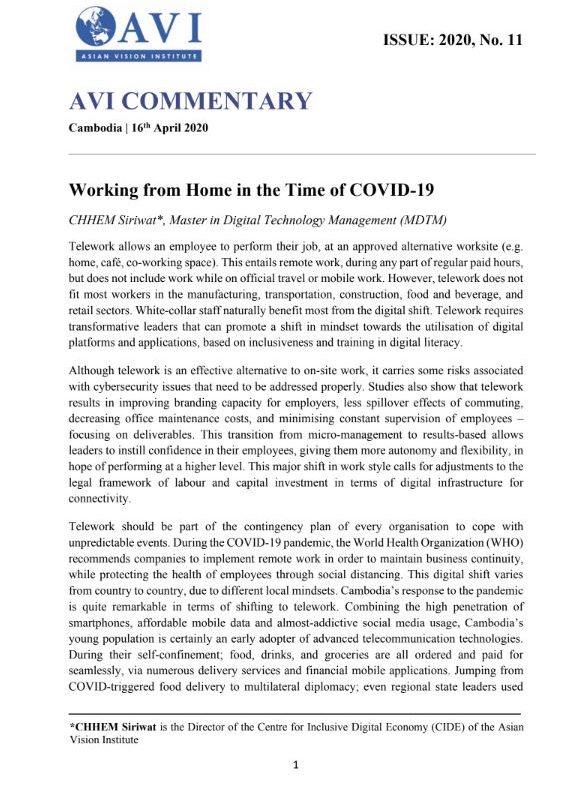