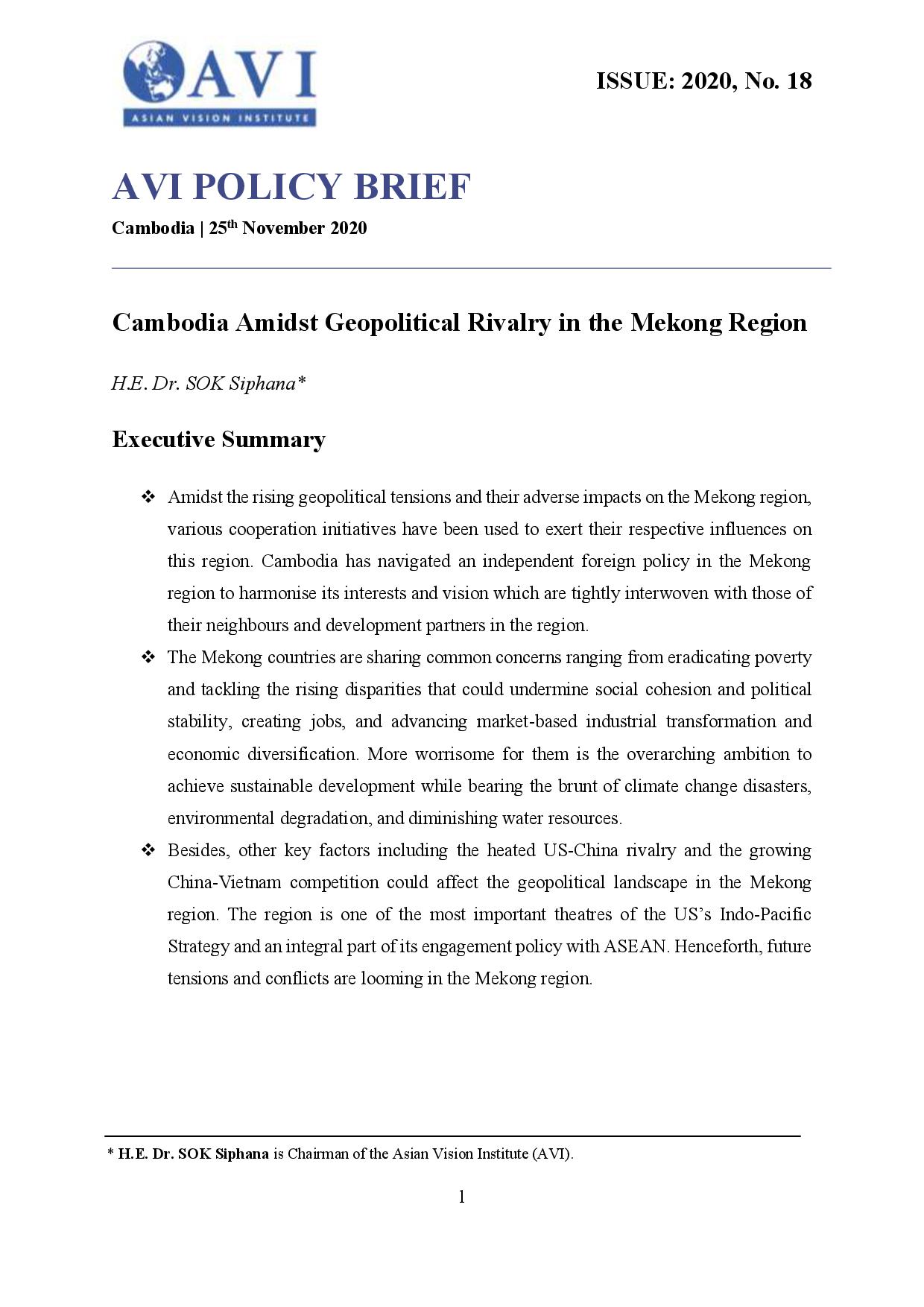 Cambodia Amidst Geopolitical Rivalry in the Mekong Region

Cambodia is trying to navigate through the interesting times, amidst rising geopolitical tensions and their effects on security in the Mekong region. As the geopolitical rivalries between the major powers exacerbate, their various cooperation initiatives have been used indirectly to exert their respective influences in the region. This begs a question as to whether these multiple initiatives are beneficial or problematic for Cambodia? How may Cambodia make the most use of the initiatives without jeopardising its sovereignty?

Pursuing an inclusive and open multilateralism and regionalism, Cambodia has been proactive in harmonising its interests and vision with those of the region. As a small state, Cambodia’s choice is to pursue an independent foreign policy although it recognises that its national stability and prosperity are tightly interwoven with those of their neighbours and development partners. A fact, the possibility of any decoupling has never been contemplated.

Clearly, the Mekong region as a new growth centre of Asia can give Cambodia tremendous traction in terms of economic development and regional connectivity, as witnessed by its careful hedging through economic and investment diversification and export market expansion.

The Mekong region boasts great economic potentials due to enhanced regional integration and connectivity within ASEAN and its geopolitical location between the two Asian giants, China and India. Land-based connectivity plays a crucial role in regional development and prosperity. Through China, the Mekong subregion can further connect with central Asia and Europe, and via India, it can further connect with South Asia. Hence, the Mekong region has become a robust economic hub, but, at the same time, a strategic frontier of great powers in the Asia Pacific. China, the US, Japan, India, and the Republic of Korea are the key actors in the region. Thailand and Vietnam, the two regional middle powers, are also competing for their own influences.
Since 2011, various Mekong cooperation frameworks have been developed. They are comprised of six cooperation initiatives with major development partners, namely: (1) Mekong- Japan Cooperation; (2) the Lower Mekong Initiative (LMI), and the Friends of the Lower Mekong (FLM) with the US; (3) the Mekong-Ganga Cooperation (MGC) with India; (4) the Mekong-Republic of Korea Cooperation; (5) the Mekong-Lancang Cooperation (MLC) with China; and (6) the Ayeyawady-Chao Phraya-Mekong Economic Cooperation Strategy (ACMECS). Besides, other Mekong-related Initiatives and mechanisms, such as the Mekong River Commission (MRC) and Greater Mekong Sub-region Economic Cooperation (GMS) have been initiated.

Why the Mekong subregion? And why now? In recent years, the Mekong subregion has attained some geopolitical significance on top of its vast potential to be a “global growth center”. The region has recorded impressive economic growth due in part to its location at the juncture of the enormous emerging markets of Asia, such as China and India, which together boasted a population of about 3.3 billion, or nearly half of the population of the entire world.

The other important factor that is so visible in Mekong countries is the rise of the “middle class” with millions of new households having significant discretionary purchasing power joining the consuming class every year. As rural population in the region continues to move to cities in search of better job opportunities, many of the fastest-growing towns and cities have been expanding, offering vast opportunities for infrastructure and economic development.

However, the challenges facing the Mekong region are also numerous and multifold. From the development perspective, some Mekong countries have entered the post-industrial stage while some are still at the developing stage, and others have just opened their doors to modernisation. Their common concerns range from eradicating poverty and tackling the rising disparities that could undermine social cohesion and political stability, job creation, and the advancement of market-based industrial transformation and economic diversification.

More worrisome for them is the overarching ambition to achieve sustainable development while bearing the brunt of climate change disasters, environmental degradation, and diminishing water resources. In fact, the Mekong region is acutely exposed to the environmental pressures due to its rapid urbanisation and air pollution, groundwater depletion, and unsustainable management of fisheries, to cite just a few.

On top of these development challenges, a number of geopolitical trends continue to affect the sub-region over the coming decade, including the shift towards a multipolar global power structure, some unresolved and overlapping territorial and maritime claims, some ethnic and religious strife and the displacement of people, various forms of non-traditional transnational crimes, and cross border infectious diseases.

For the Mekong leaders, it is quite obvious that the region on its own may not be able to overcome these challenges. All of the 5 Mekong countries are an integral part of the ASEAN Community. Together with the relevant development partners, they could forge the synergy of all five individual countries to promote their respective development by getting the necessary investment in building a network of highways, railways, waterways, ports, and air routes in the Mekong region. Only through cooperation in all its forms, be they bilateral, triangular, regional and multilateral, can they help them achieve their goals of realising the ASEAN Community.

In recent years, there has been a strong sense of urgency to collaborate and join efforts through this sub-regional complementarity to secure economic growth in order to withstand global downturns and to respond to rising anti-globalisation trends, renewed nationalism, and protectionism. From the development partners’ side, their agenda is quite predictable. They advocated further opening up of the market, improving the investment environment, eliminating trade barriers and facilitating trade and investment while abiding by market rules and international norms as well as promoting the role of enterprises as key players.

The Mekong cooperation comes in different shapes and forms, each has its own brand identity and specialised features. The two cooperation mechanisms with Japan and China are very comprehensive in nature, covering both soft and hard infrastructure, while the one with the ROK and India are sectoral. Only the cooperation with the U.S., the LMI, took the shape of a policy dialogue platform.

Geopolitical Rivalry in the Mekong Region

Future tensions and conflicts are looming in the Mekong region. The key factors affecting the geopolitical landscape are the heated US-China rivalry and growing China-Vietnam competition. The region is one of the most important theatres of the US’s Indo-Pacific Strategy and an integral part of its engagement policy with ASEAN. The LMI is a good program that has run for a decade already. It bears the signatures of all the US Secretaries of State, starting with Hillary Clinton, John Kerry, Rex Tillerson and Michael Pompeo. It has as its core agenda the consolidation of democracy and the rule of law, respect for human rights, and realisation of peacebuilding in the Mekong sub-region. Unlike the other Mekong cooperation frameworks, the LMI is quite unique in the sense that it is more a policy dialogue and soft experiences- sharing platform on transboundary development challenges in the Lower Mekong Sub-Region and a soft capacity building-based cooperation.

In recent years, the US has a geopolitical agenda to challenge the rising power of China in the region. Calling the Mekong region the forefront and centre of the US’s engagement in the region, the US aims to empower the voices of the lower Mekong countries to have an equal footing relationship with China. The US has also deepened its engagement with the Mekong region by upgrading the Lower Mekong Initiative (LMI) to a Mekong-US Partnership this year and has pledged to offer more support to the lower Mekong countries.

India has taken some concrete measures to materialise the Mekong-Ganga Cooperation, especially in the field of human resources development and cultural cooperation. India has yet to fully used its soft power resources, cultural and civilisational values, to advance its presence and role in the region. Worse yet, India’s recent withdrawal from the Regional Comprehensive Economic Partnership (RCEP) is also a missed opportunity for India and a clear disappointment for ASEAN and Mekong countries.

Japan has delivered in the past decades enormous achievements, thanks to solid strategies and action plans, but more so from strong political leadership. For their part, Mekong countries acknowledged that Japan has been a long-standing and indispensable development partner for the region. For Japan, high-quality infrastructure investment has helped close the infrastructure gap between Mekong countries and the remaining ASEAN countries.

The Mekong Lancang Cooperation is the latest comer, a new kid on the block as they say, except China is not a small kid. Quite the opposite, I must say. Compared with other Mekong cooperation initiatives, the young MLC has made some achievements in a very short time. China has put more effort and resources into securing its economic and geopolitical stronghold in the region. Under the MLC, China has provided significant financial assistance to the other MLC members. China has proposed creating a regional secretariat for the MLC, but the initiative has not taken off the ground just yet due to opposition from Vietnam, which is also against connecting the MLC with the New International Land-Sea Trade Corridor.

The Mekong-ROK is almost a decade old initiative. The mechanism received a big political boost with the ROK’s New Southern Policy, which sought to strengthen its partnership with Mekong countries in synergy with other existing regional cooperation initiatives and mechanisms. After witnessing a solid track record over the past 7 years, there was enough confidence to explore the possibility of elevating it from a Foreign Ministerial Level to the highest Summit level. The inaugural Mekong-ROK Summit was held back-to-back with the “30th ASEAN-ROK Commemorative Summit” in Busan in November 2019. In fact, the initiative came from Samdech Techo Hun Sen who was quite a vocal advocate for this ambitious proposal.

The seed of ACMECS was planted at the Special ASEAN Summit on SARS in Bangkok in 2003 and its full ACMECS membership was completed when Vietnam joined in 2004. Since then, ACMECS has made its way to define its “raison d’être” amidst the proliferation of other Mekong sub-region cooperation frameworks. Fast-forward to the present time, ACMECS has made a bold move to formulate its Master Plan (2019–2023), which is regionally designed and “home-grown” based on the common achievements as well as trials-and-errors of more than a decade long journey of sub-regional cooperation. This home-grown vision is to a great extent driven by a strong spirit of self-reliance and ownership of the sub-region in as much as from the imperative to interact with other Mekong subregional frameworks, which aside from development complementarities, have been under tremendous geopolitical pressures arising from the recent rivalry between the two superpowers.

This article was adapted from the author’s opening remarks at the panel discussion on “Cambodia Amidst Geopolitical Rivalry in the Mekong Region,” organised by the Mekong Centre for Strategic Studies (MCSS), Asian Vision Institute (AVI) on 9th November 2020. 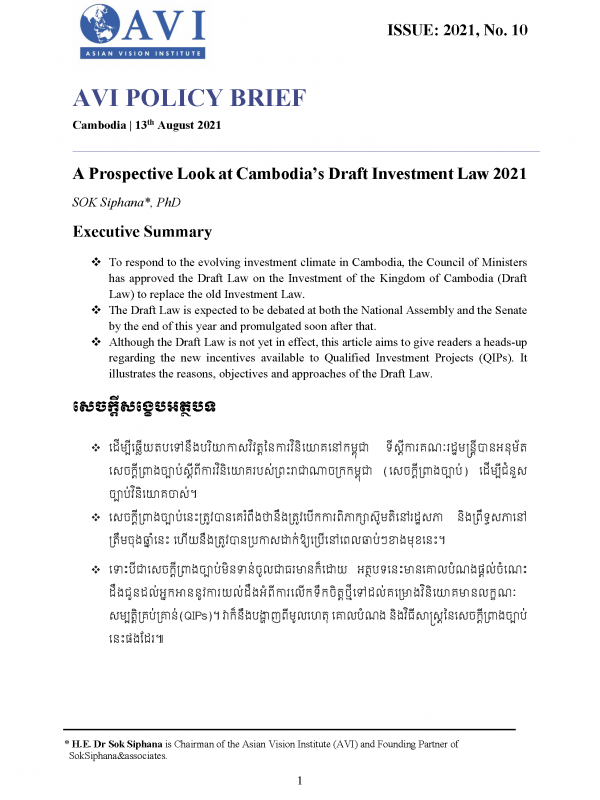 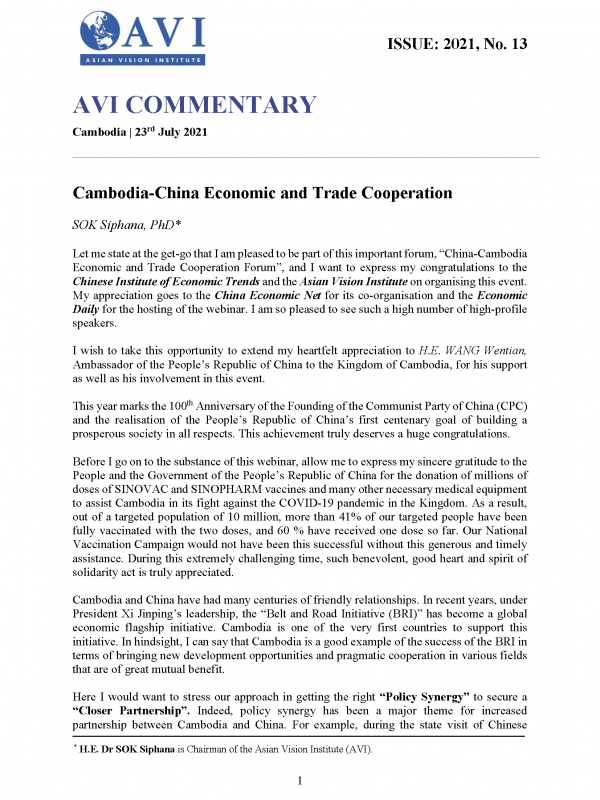 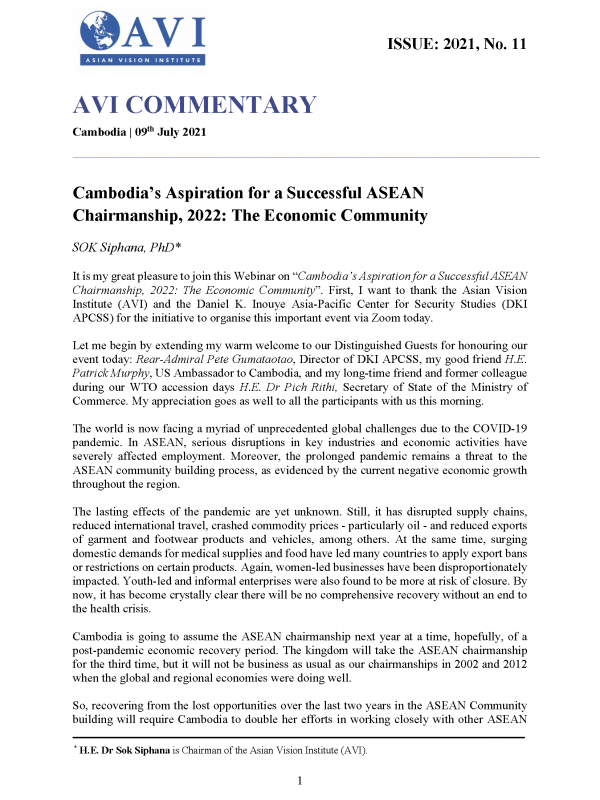 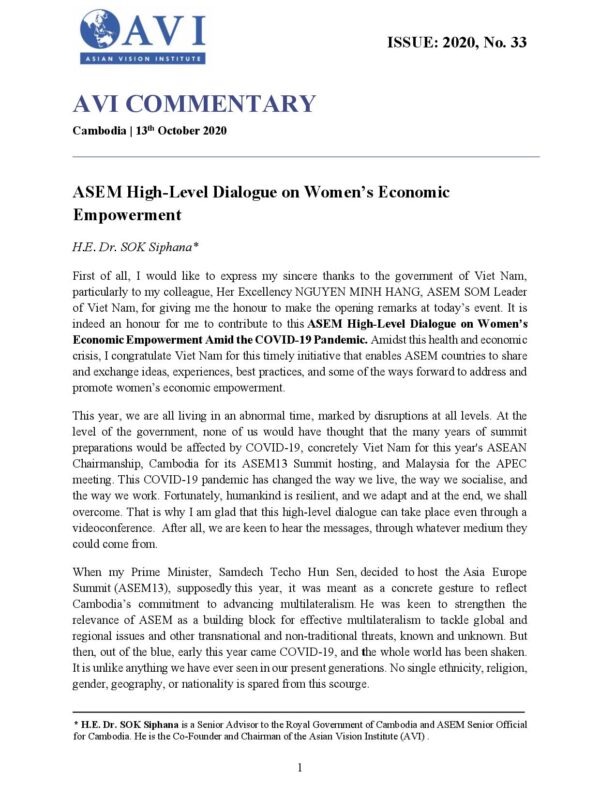