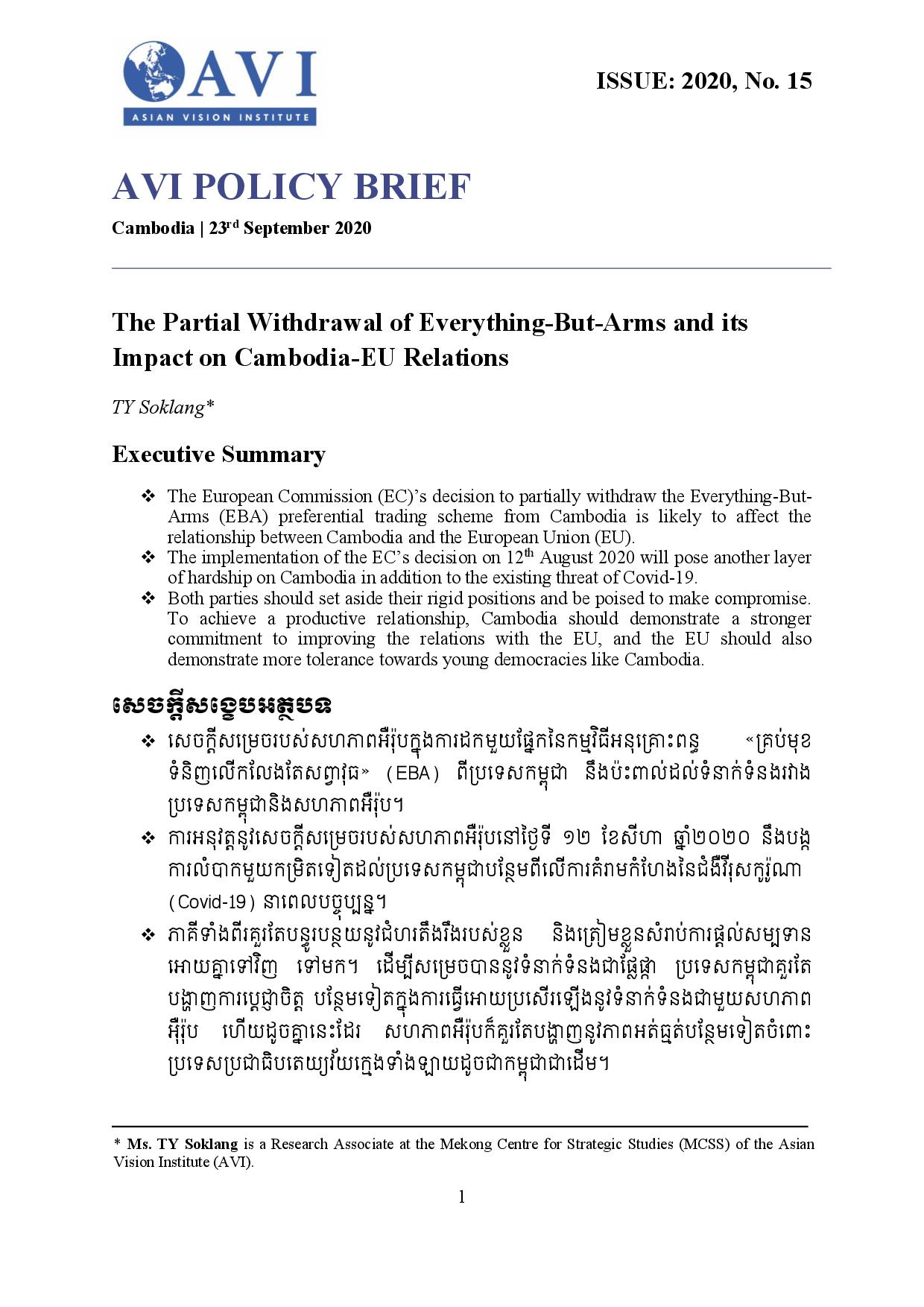 The Everything But Arms (EBA) is a preferential trading program initiated in 2001 under the EU’s Generalized Scheme of Preferences (GSP) which allows 49 poorest countries in the world to export all kinds of products except arms to the EU market with duty and quota exemption (Russell, 2019). Cambodia is one of those countries that has enjoyed huge benefits from this preferential treatment program (Ministry of Commerce of Cambodia, 2014).

Effective from 12th August 2020, the EC officially kicked off the withdrawal of 20 per cent of the preferential trading scheme granted to Cambodia’s products, ranging from clothing and footwear to travel goods (European Commission, 2020). The decision will spark negative implications, especially affecting the relations between Cambodia and the EU. This article examines the impacts of the EC’s EBA partial withdrawal decision on Cambodia and the overall ties between Cambodia and the EU. It also shows the Cambodian government’s policy responses to cushion the blow.

While still struggling to cope with the economic fallout of the Covid-19 pandemic, Cambodia has to face with an additional hardship resulting from the EC’s recent decision to withdraw the EBA scheme from the Kingdom. Amid the looming threat of the Covid-19 pandemic worldwide, Cambodia has experienced a severe economic fallout in several industries and businesses, including manufacturing, aviation, tourism and real estate. For instance, due to a rapid decrease in purchase order from overseas, particularly from Europe, 400 garment and textile factories were forced to shut down, leaving as many as 150,000 workers out of work (Khmer Times, July 2, 2020). Therefore, the EU’s standard tariffs imposed on Cambodia’s products will only add another heavy blow on the already-crippling industries, thus putting hundreds of thousands of Cambodian workers and their dependents at unprecedented risks.

Businesses and industries are not the only victims of such an unkind and unfair decision, but also the Royal Government of Cambodia. As agreed by many, states have the responsibility to protect their own people. In the case of Cambodia, the partial loss of the EBA will pose a significant challenge to the legitimacy of the Cambodian People’s Party-led government. If the government fails to provide sound solutions to relieve people’s hardship, they may inevitably have to face with socio-economic and political instability in the future. Well before the EBA’s decision came into force, the impact of the Covid-19 pandemic was already witnessed with demonstrations staged by garment workers demanding factory owners to pay their salaries. For instance, on 17th January 2020, around 2,000 garment workers staged a protest demanding for their salaries be paid by their employers, whose businesses had become bankrupt (Khut, 2020). Some other protests have also been staged by other garment workers, which indicated the severity of the pandemic-triggered economic recession.

The EC’s EBA decision has sparked concerns among relevant stakeholders. In response to the concerns, the Cambodian government has introduced a wide range of policy measures aiming to ease the burden of the affected industries and to attract new investment projects. For instance, the 17-point plan worth US$400 million has been rolled out in a bid to save the affected businesses (Hor, 2019).

The strategy illustrates important measures to facilitate trade and lower the cost of doing business. The measures include the withdrawal of inspection of the Cambodia Import-Export and Fraud Repression Directorate General at the international gateways; the exemption of Certificates of Origin on export goods; the reduction of logistics costs, loading and services fees at both Phnom Penh and Sihanouk Ville Autonomous ports; the supports of small and medium-sized enterprises business set up; the introduction of incentives on customs and tax; the amendment to the Law on Investment; and the finalisation of the Law on Special Economic Zones (World Bank Group 2019, 28).

Moreover, on 24th March 2020, the government also announced the tax exemptions for industries whose products have been hit hard by the withdrawal of the EBA scheme. For instance, the government has introduced a 50 per cent and 100 per cent tax reduction scheme for a period of six months to support businesses whose incomes decrease between 20 and 39 per cent and more than 40 per cent respectively (EuroCham Cambodia, 2020).

Relations As mentioned above, we can see the flexibility of the Cambodian government in responding to the challenges. The measures introduced by the government tend to allow the country to mitigate the adverse impact from the sanction imposed by the EC. However, in the course of implementing the mitigation measures, it is likely to see the deterioration of the Cambodia-EU relations because Cambodia will bolster relations with other partners, particularly China in the forms of trading and investment to offset the loss incurred by the EC’s decision. Consequently, this may keep Cambodia farther from the European Union.

Meanwhile, during this tough time, China has proven to be very helpful in supporting and strengthening economic cooperation with Cambodia. The Chinese government has pledged nearly US$600 million in aid to Cambodia for the years 2019–2021, and it imported around 400,000 tons of rice from the Kingdom (South China Morning Post, January 22, 2020).

The recent conclusion of negotiations over the bilateral Free Trade Agreement (FTA) with China is another important step made by Cambodia to cushion the blow of the EBA loss (Sun, 2020). While the EU has walked one step backward in its relations with Cambodia, China has moved several steps forward. If such a situation persists, Cambodia and the EU will not be able to see each other eye-to-eye in the long run.

Both Cambodia and the EU really need each other to strengthen multilateralism, which has been steadily weakened by the increasing US-China rivalry. Cambodia and the EU have shared a strong interest in shoring up the multilateral arrangements for mutual benefits. This is the reason why the parties have chosen the following motto: “Strengthening Multilateralism for Shared Growth” for the 13th Summit of the Asia-Europe Meeting (ASEM13) to be held in Cambodia in mid-2021 (Ministry of Foreign Affairs and International Cooperation of Cambodia, n.d.).

Following the official partial EBA withdrawal in August 2020, Cambodia may suffer an additional hardship putting the Kingdom at risk to socio-economic and political instability. To cushion the blow caused by the EC’s EBA decision, the Cambodian government has introduced a number of policies, including but not limited to the income tax relief and a large scale economic recovery plan.

The EBA withdrawal would have negative implications for Cambodia-EU relations and would undermine both parties’ mammoth efforts in strengthening multilateralism. Both sides will lose more in the long run as a result of their unfriendly relationship. Cambodia and the EU should bear in mind that both sides need each other to resolve several transnational problems, especially during this crisis period. The widespread infection of the Covid-19 pandemic showcases our dire need for mutual cooperation and assistance in fighting against this transboundary threat.

Cambodia and the EU have, over the past years, maintained a cordial relations, not only in terms of trade but also in many other areas of cooperation including politics, culture and sustainable development. In spite of being a small country, Cambodia’s continuous backing of the EU’s intention to become an ASEAN strategic partner may help boost Cambodia’s international image. Therefore, EU’s politicians may see the small country as a positive force in the international fora.

The EU should be tolerant of fledgling democracies like Cambodia. Democratisation anywhere in the world always takes time, and Cambodia is not an exception. The EU should also be aware that Cambodia has other partners to work with. Therefore, the EU’s stick will bear little results as compared with its carrot. It should thus recognise the significant progress made by the Cambodian government in terms of democratisation, modernization, and contributions to regional and world peace. Instead of wasting resources in arguing with each other, the EU and Cambodia should reconsider their relations and seek a common ground to build a stronger and more productive relationship.