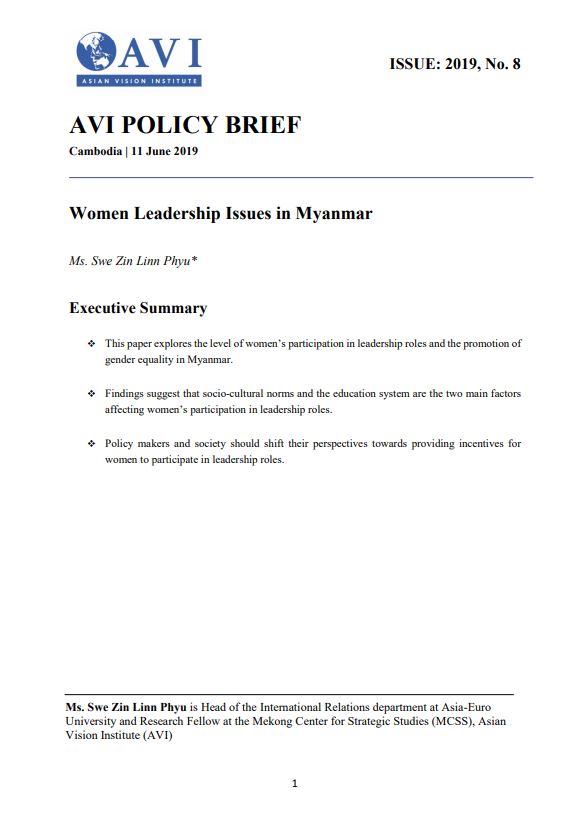 Myanmar is a young democratic country experiencing ongoing political, economic and social changes. Women leaders increasingly experience gender discrimination in every dimension of their environment and communities, which contributes to obstructed career development.

Many people say that women in Myanmar do not experience wide gender discrimination yet there are many cases of discrimination based on region, ethnicity and religion that are inalienable from gender and women leadership, especially in the political sector.

Prevalent in today’s society, especially with those from remote areas, are beliefs in a social preceptive view on leadership being related to men rather than women is widespread. Although non-governmental organisations and social communities are fighting to change these beliefs, it still remains the norm for many in Myanmar.

In this article, the following will be discussed: Are gender stereotypes affecting the role of women in their leadership journeys in the Myanmar government? What are the reasons? What are the challenges?

Gender discrimination in higher education plays a significant role in determining the future careers of women in Myanmar. Gender discrimination exists even though the constitution explicitly mentions the significance of a gender discrimination-free society, including in the Myanmar education system. However, university entrance marks are classified differently for men and women in Myanmar. Women need to obtain higher score thresholds than men in order to enter professional subjects in the University of Medicine and Engineering Technology in Myanmar. There are also issues in some other universities where not only a higher score threshold is required in their matriculation exam but also that a women- intake quota, which can be as low as 20 percent, exists in universities such as the Maritime University in Myanmar. In some cases, women do not have ‘family rights’ to choose a major of study of their interest as family members (especially the father) decide for them. According to the World Economic Forum Global Gender Gap Report 2017, Myanmar has a significant gender gap (14.9 % for men and 12.1 % for women) in tertiary education enrollment.

According to the Gender Equity Network report, only 4.6 percent of seats in Myanmar’s Parliament in 2012 were held by women. The Myanmar government appointed a second woman minister in February 2014. Likewise, the new civilian government appointed a second woman ambassador in August 2015. Compared to other Southeast Asian countries, the number of women in leadership roles is very low in Myanmar.

In Myanmar government ministries, it is common for male managers to determine female staff’s participation in work trips based on notions of safety and cultural points of view, particularly that women should not accompany men for long work trips in other countries. In such a paradigm, female staff do not have ‘qualification’ rights to ultimately decide their ministerial careers. Most high-level positions at ministries are held by Military Generals, who are all male, and if they move to civilian sectors, they receive an expedited directory to senior management roles. Women are not afforded the same avenues to reach these positions.

Additionally, women in Kayah State join the military to fight for their communities. Despite their field involvement, they are excluded from decision making at all levels. For example, only 2 out of 52 committee members from 12 signatory delegations of ceasefire agreements were women. Though a rough, generalised figure it is still a good indicator of the minimal participation that women are afforded. Even some distinguished female officials responsible for peace talks have reportedly been ruled out by ethnic. Furthermore, leaders often think that achieving ceasefires do not require women’s participation. This completely sidelines women with their voices left unheard. Ex-militant community leaders often erroneously believe that men’s voices already embody women’s. People still subscribe to the mentality that women are at a disadvantage when stepping into these affairs.

Widespread gender stereotypes and a higher education gender imbalance suggest deficits in belief in women leaders and recognition of their operative abilities, particularly stemming from a lack of confidence and traditional cultural value systems. These obstacles to career development leave women playing only supportive roles, especially in government sectors.

Women should fight for greater participation as per their rights under by The Convention on the Elimination of all Forms of Discrimination Against Women agreement, United Nations Security Council Resolution 1325 statement, and the National Strategic Plan for the Advancement of Women.

Towards developing greater women leadership, the first Women’s Forum Myanmar was held in 2013 where State Counsellor Aung San Suu Kyi proclaimed, “Women, I believe, have a great role to play in building a culture. It takes time to change a culture, a mindset.” This statement signified strong encouragement for Myanmar’s women to take part in culture-building.

The government should promote women empowerment programmes such as providing technical training opportunities, especially in partnership with international and national organisations from different sectors. Furthermore, there is a need to more intensively promote gender equality policies as part of the National Action Plan in Myanmar.

In the meantime, as Myanmar’s democratisation process continues, it is important to start to build upon the foundations of national gender equality policies. Society should drop the primitive gender components of socio-cultural beliefs as well as remove the legal barriers that obstruct women participation in leadership. Furthermore, society should speak out about reflexivity and inclusivity. Everyone should have the opportunity to choose to collaborate with everybody else and be treated equally. To achieve such a favourable outcome, thorough understandings of the diverse cultures, beliefs and traditions are imperative. The lessons learned from experiences will allow us to have an objective perspective in decision-making processes.