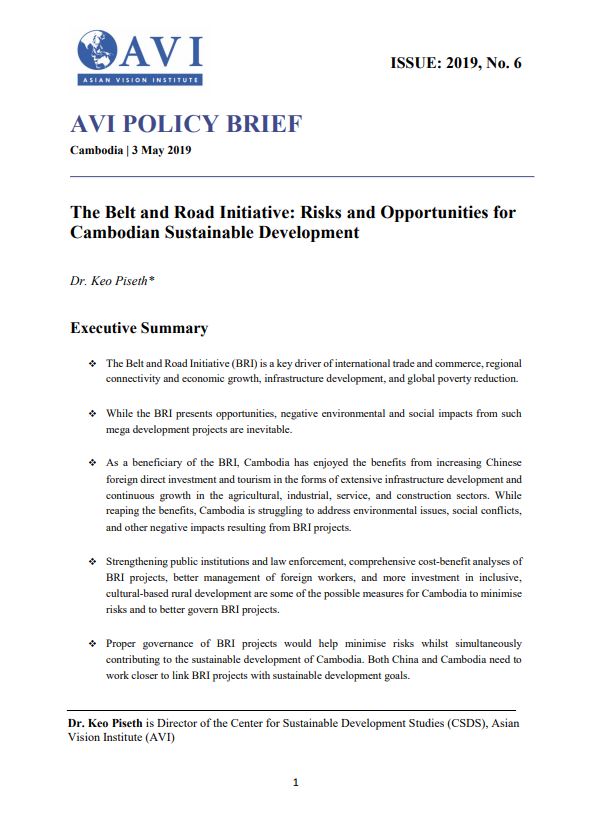 The Belt and Road Initiative: Risks and Opportunities for Cambodian Sustainable Development

Launched in 2013 by President Xi Jinping, the Belt and Road Initiative (BRI) is an ambitious global effort aiming to promote regional cooperation and connectivity and strengthen infrastructure development, trade, and investment. Through the Silk Road Economic Belt and the New Maritime Silk Road, the project will link China to more than 70 countries in Southeast, Central, and South Asia; the Gulf Countries; North Africa; and Europe, where more than 62 percent of the world’s population and 30 percent of global gross domestic product (GDP) are concentrated. If successfully implemented, the BRI will become one of the key drivers of international trade and commerce and regional economic growth, reducing trade costs and barriers, expanding resilient infrastructure, and alleviating global poverty, among other benefits. According to a World Bank research project report, “the BRI would be largely beneficial”. The report highlights that the BRI could potentially lift 8.7 million people out of extreme poverty and 34 million people out of moderate poverty. By 2030, global income is expected to increase by 0.7 percent, which is equivalent to approximately half a trillion US dollars in 2014 prices and market exchange rates. The BRI can capture about 82 percent of that gain, in which China stands to benefit by roughly 36 percent of the total global gain.

Whilst there are clearly positive impacts brought by the BRI, there are also concerns, or even criticisms, of the initiative. Increasing global carbon emissions, environmental destruction and biodiversity loss, debt traps, elite capture, corruption, local job loss, and social conflicts in recipient countries are some of the key concerns being raised. In response to the critics, President Xi has advised BRI project developers and implementers to strive to maintain “green, healthy, intelligent, and peaceful” aspects of the projects, and called for cooperation from the recipient countries on environmental protection and preservation. Furthermore, the Guidance on Building the Green Belt and Road was introduced by the Chinese Ministry of Environmental Protection. However, the extent to which the guidance is implemented remains unclear.

Consistent with the ascendancy of the BRI in Southeast Asia, Cambodia has been a key beneficiary. As diplomatic relations between Cambodia and China have improved over the decades, spurred on by Cambodia’s policy of ‘friend to all, but enemy to none’, Cambodia has shown strong support for the initiatives of the Chinese government, from the BRI, to the establishment of the Asian Infrastructure Investment Bank, and other efforts for regional cooperation. Participating in the BRI has proved to be beneficial for Cambodia in terms of increasing Chinese foreign direct investment and tourism, which in turn has stimulated extensive infrastructure development—particularly in urgently needed infrastructures such as roads, hydropower dams, bridges, hospitals, and schools—and continuous growth in the agricultural, industrial, service, and construction sectors.

While the BRI has positively contributed to Cambodia’s economic development and poverty alleviation, there is no doubt that negative impacts related to the initiative have also emerged. Development-related problems resulting from the BRI are not unique to Cambodia, but the magnitude of impacts vary depending on the regulations and law enforcement in each of the beneficiary countries.

With the BRI’s non-binding conditions in such areas as environmental and ecological protection, biological conservation, social protection, and cultural preservation, where legal instruments are not adequate and enforcement is weak, the impacts are inevitable. Environmental degradation, water and soil pollution, unmanaged solid and sewage waste, biodiversity losses, and social conflicts are evident.

In addition, inadequate physical infrastructure, human resources, and governance systems in place to receive a large influx of Chinese workers for BRI projects make it challenging for each state to effectively respond. In the Cambodian case of Sihanoukville, the city has lost its charm to tourists, both domestic and international, because of environmental destruction, improper management of solid and sewage waste, and increasing social conflict and violence among foreign workers and with local residents. The situation is complicated by different cultures and social behaviours, as well as language barriers. These issues have not effectively been addressed, despite the tremendous joint efforts being spearheaded by the Royal Government of Cambodia and repeated calls from the Chinese Ambassador to Cambodia for their citizens to follow local regulations and respect local culture and for stricter law enforcement for those who break the law.

An additional, and frequently cited, concern about the BRI are potential debt traps. In cases where participating countries expand their debt to an unsustainable level and are unable to repay, these countries have no choice but to give up their rights to manage their seaports or airports to the Chinese government. With regard to this concern, the Cambodian government appears cautious and is paying close attention to its debt ratio. The Cambodian Ministry of Economy and Finance (MoEF), which regularly publishes public debt data, confirms that the Cambodian debt ratio remains in a healthy range. The MoEF stressed that “Based on the international best practice, Cambodia’s public debt remains ‘sustainable’ and ‘low risk’ of debt distress.”

With the opportunities being presented, embracing the BRI is important for Cambodia. Nevertheless, some areas require close attention in order for Cambodia to take full advantage of the opportunities and to build synergies towards Cambodia achieving its 2030 and 2050 visions, the United Nations Sustainable Development Goals 2030, the Rectangular Strategy IV, and the National Strategic Development Plan. The following are some of the key areas for immediate attention and consideration.

First, there is an urgent need to strengthen Cambodia’s public institutional capacity and to provide enabling mechanisms for these institutions to promote effective law enforcement and legal instruments to safeguard the environment, ecology, people, and local cultures in areas where BRI projects are undertaken. With a keen interest from the Chinese counterpart to promote environmental and social protection, as seen in President Xi Jinping’s abovementioned remark, there is a chance that important mechanisms, such as a Strategic Environmental Assessment or an Environmental and Social Impact Assessment, can be established with mitigating measures in place encompassing the initial planning, implementation, and post-project implementation. The literature demonstrates that regulations for environmental impact assessment and environmental protection in China are more stringent than in recipient countries such as Cambodia. Applying Chinese standards for environmental protection is already a good start if the international standard is not yet feasible.

Second, attention should be paid to the cost-benefit analysis and economic return of the proposed projects. This is to avoid falling into possible debt traps as a result of BRI projects. Additionally, mechanisms for transparency and accountability for BRI projects, especially in infrastructure, should be established to prevent elite capture and corruption in these gigantic, loan-based infrastructure projects that are supposed to serve the long-term interests of the country.

Next, it is essential to better manage foreign workers engaged in BRI projects, which is also applicable to other projects. Systems for recording foreign workers, which would take note of basic personal data such as general education, skills, criminal records, income, language skills, and basic knowledge about local laws and cultures, should be set up. This would help both parties to recruit suitable workers who have the right skills to contribute to the success of the project and the development of Cambodia, while screening out those who may potentially pose threats to social and public order, as can be seen in a number of cases of violence that have taken place in Sihanoukville and other provinces. Additionally, proper taxation, protection of local employment and businesses, and an employment ratio of foreign and domestic workers should be enforced in order for the Cambodian government to generate sufficient funding to adequately maintain public infrastructure and services that are increasingly burdened.

Last but not least, investment from the BRI should focus on culture-based and grassroots-driven rural development. To realise its 2030 and 2050 visions, Cambodia has to maximise the potential of its rural resources, both natural and human, for economic development. To do so, comprehensive studies led by villagers should be conducted in order to understand resource availability and potential for development, whether for agricultural, service, or industrial sectors. Economic growth centres (clusters of villages) should be established to support adjacent villages. With employment and income-earning opportunities available, community members could rediscover the charm of their villages and be keen to stay on and work close to their families. This would help reduce emigration and stabilise local populations, which are the foundation of community and village development and ultimately contributes to national economic growth, poverty alleviation, and sustainable and inclusive development. For the project to be effective, integrated and cross-cutting approaches, including human resource development, public-private partnership, technology transfer, cultural preservation, market creation, scientific and innovative research, and local-based (tailor-made) development interventions should be applied.

In summary, properly harnessing the BRI would help minimise risks and, at the same time, significantly contribute to the sustainable development of Cambodia.