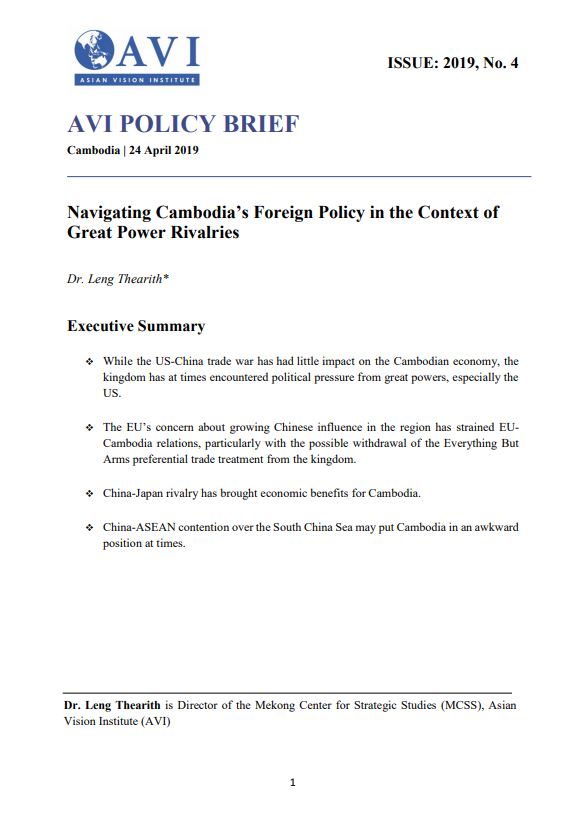 The world is increasingly becoming a theatre of power competition between ‘the West’ and China, placing great pressure on small states such as Cambodia. As a small state with limited capabilities, the kingdom finds itself with limited space to advance its national interests amidst this rivalry. Cambodia experiences pressure from US-China, EU-China, Japan-China and ASEAN-China rivalries, of which the US-China and EU-China rivalries have the most notable impacts on Cambodia. The kingdom needs to know how to diplomatically manoeuvre in a flexible manner so as to maximise its national interests and mitigate negative impacts.

The US, under Donald Trump’s presidency, has aggressively contained China on two fronts; trade and geostrategy. In terms of trade, Washington has imposed US$250 billion worth of duties on Chinese imported products since July 2018, while China imposing US$110 billion worth of tariffs on American goods in retaliation. This trade war has significantly impacted Southeast Asian enterprises with supply chains with China. Electronic producers are among those that have suffered from this trade war. Conversely, some Southeast Asian states may benefit from the trade war, as manufacturers could shift production from China to the region. In the case of Cambodia, direct consequences of the trade war are yet to be felt, as the kingdom’s primary export destination is the EU.

Although suffering less from the US-China trade war, Cambodia has felt significant impacts from US- China geostrategic competition, especially over the South China Sea. While China has upgraded its military capabilities in the South China Sea, the US has intensified its military activities to secure freedom of navigation in the region. Cambodia faces potentially being drawn into this competition, especially with the US wanting the kingdom to express a clear position over the issue. It could also face other consequences arising from being unable to articulate ‘anti-China’ statements. The US’ imposition of visa restrictions on Cambodian government officials in 2017 illustrates this, as it was partly driven by Cambodia’s acquiescence to China’s position on the South China Sea. The EU is also concerned about China’s growing domination in Southeast Asia, particularly growing ‘Chinese-backed authoritarianism’.

The EU may, therefore, utilise a ‘carrot and stick’ policy against small countries believed to be China’s firm supporters. Cambodia may be on the receiving end of such a policy, considering that it has been perceived by the EU as one of China’s staunchest allies. The crackdown on the Cambodian National Rescue Party in recent years has fastened such a perception, eventually resulting in the EU’s current threat to withdraw the Everything But Arms (EBA) preferential trade treatment from Cambodia.

Another competition that may affect this small state is the rivalry between Japan and China. While China has tried to project its soft power in Southeast Asia through the Belt and Road Initiative (BRI), Japan has pushed for its own version in the form of the Indo-Pacific Strategy. These competing initiatives have so far posed no direct threats to Cambodia, but rather opportunities. The kingdom may be able to benefit from both Japan and China by expressing support for both initiatives. Further, neither Japan nor China have pressured the kingdom to take sides over their respective initiatives.

The final significant competition affecting Cambodia is that between China and ASEAN. The kingdom has previously been a scapegoat of such competition. In 2012 it wished to have a watered-down version of the ASEAN declaration while other ASEAN member states (specifically the Philippines and Vietnam) wanted a version that criticised China’s unilateral activities in the South China Sea. The good thing for Cambodia is that the Philippines, under President Duterte, is apparently bandwagoning with China. Additionally, Vietnam has grown more understanding of Cambodia’s situation and no longer pushes Cambodia to take a stance as it did in 2012. However, Vietnam will not, at any cost, compromise its core interests related to the South China Sea. Cambodia’s recognition of the issue in its 2019 bilateral joint statement with Vietnam is smart Cambodian diplomacy. The challenge ahead for Cambodia is how it handles the language in the anticipated Code of Conduct, which is expected in the next few years. It has to carefully consider both the interests of China and those of ASEAN, especially its South China Sea maritime claimants.

What Should Cambodia do to Overcome These Challenges?

In relations with the US, Cambodia should increase the level of interaction between top leaders, as this will help to build trust and confidence between Washington and Phnom Penh. The US’ main concerns not only relate to democratic backsliding, but also that Cambodia may end up as a Chinese client state. The US’s concern about China is understandable, given that many Cambodian media outlets employ anti-US rhetoric, combined with the kingdom not being vocal about the growing Chinese military presence in the South China Sea.

To respond to these concerns, Cambodia, through both government spokespersons and the media, should not use anti-American rhetoric. The media could, instead, highlight positive aspects of Cambodia-US relations, especially the role of the US in developing Cambodia’s economy. Moreover, the kingdom should endeavour to clearly articulate and explain its policy of non- alignment. Cambodia can demonstrate to the US that there is no foreign military base on its soil. It should resume military exercises with the US, building upon the resumption of Missing In Action (MIA) operations in the kingdom, as well as welcoming American-funded NGOs. In addition, Cambodia can also demonstrate its support for the US’s engagement in the Regional Comprehensive Economic Partnership (RCEP). By so doing, the US will be unlikely to withdraw its General System of Preference (GSP) from Cambodia. Generally, Cambodia should express its hope and readiness to help both friends engage in peacemaking in the region.

Responding to the EU’s concerns about China’s growing influence in the region is a big test for Cambodia. Given the kingdom’s heavy reliance on the EU market for the export of textile and footwear products, Cambodia has little leverage against the EU. The kingdom may make efforts to open up more civil society participation in freedom of expression. It may also try to support the EU in its engagement in the RCEP. By doing so, the EU may lessen the severity of its EBA withdrawal from Cambodia.

To conclude, while China-Japan and China-ASEAN competition have few negative effects on Cambodia, the kingdom may suffer from US-China and EU-China rivalries. The main problem for Cambodia is that US-China rivalry has led to a US misperception of the kingdom’s foreign policy, eventually resulting in the imposition of visa restrictions on Cambodian officials. A similar EU misperception of Cambodia’s foreign policy may stem from EU-China competition. Having been concerned about China’s growing influence inside Cambodia, the EU has started using the ‘stick’ against Cambodia in threatening the revocation of EBA.

To cope with US-China rivalry, Cambodia needs to be flexible in its diplomacy with both great powers. In relations with the US, the Cambodian government should, first of all, increase interactions with American officials in order to build trust. Secondly, it should encourage local media to portray a balanced perspective (i.e. also highlighting the positive aspects) of Cambodia-US relations, and continue articulating its non-alignment policy in public. Furthermore, the kingdom may also demonstrate its firm support for the US’s MIA operations in Cambodia, US-Cambodia military exercises, the US’s engagement in the RCEP and operations of American-funded NGOs inside the kingdom. These positive gestures should not compromise Cambodia’s relationship with China, as Cambodia should aim to simultaneously have good relations with both China and the US in a positive sum game.

Last but not least, in order to overcome the test posed by EU-China rivalry, Cambodia should open more political space for civil society groups and also express strong support for the EU’s intent to engage in the RCEP. 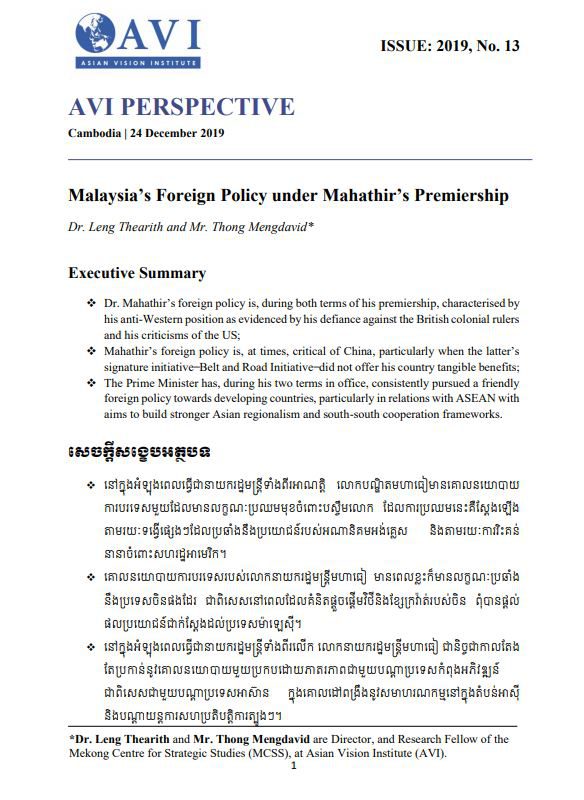 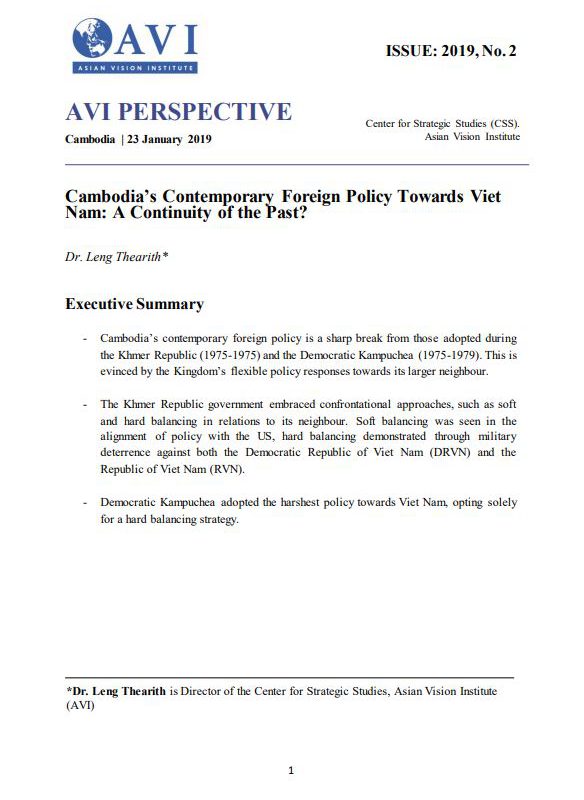 AVI PERSPECTIVE ISSUE: 2019, No. 2 | Cambodia’s Contemporary Foreign Policy Towards Viet Nam: A Continuity of the Past?

AVI PERSPECTIVE ISSUE: 2019, No. 2 | Cambodia’s Contemporary Foreign Policy Towards Viet Nam: A Continuity of the Past?