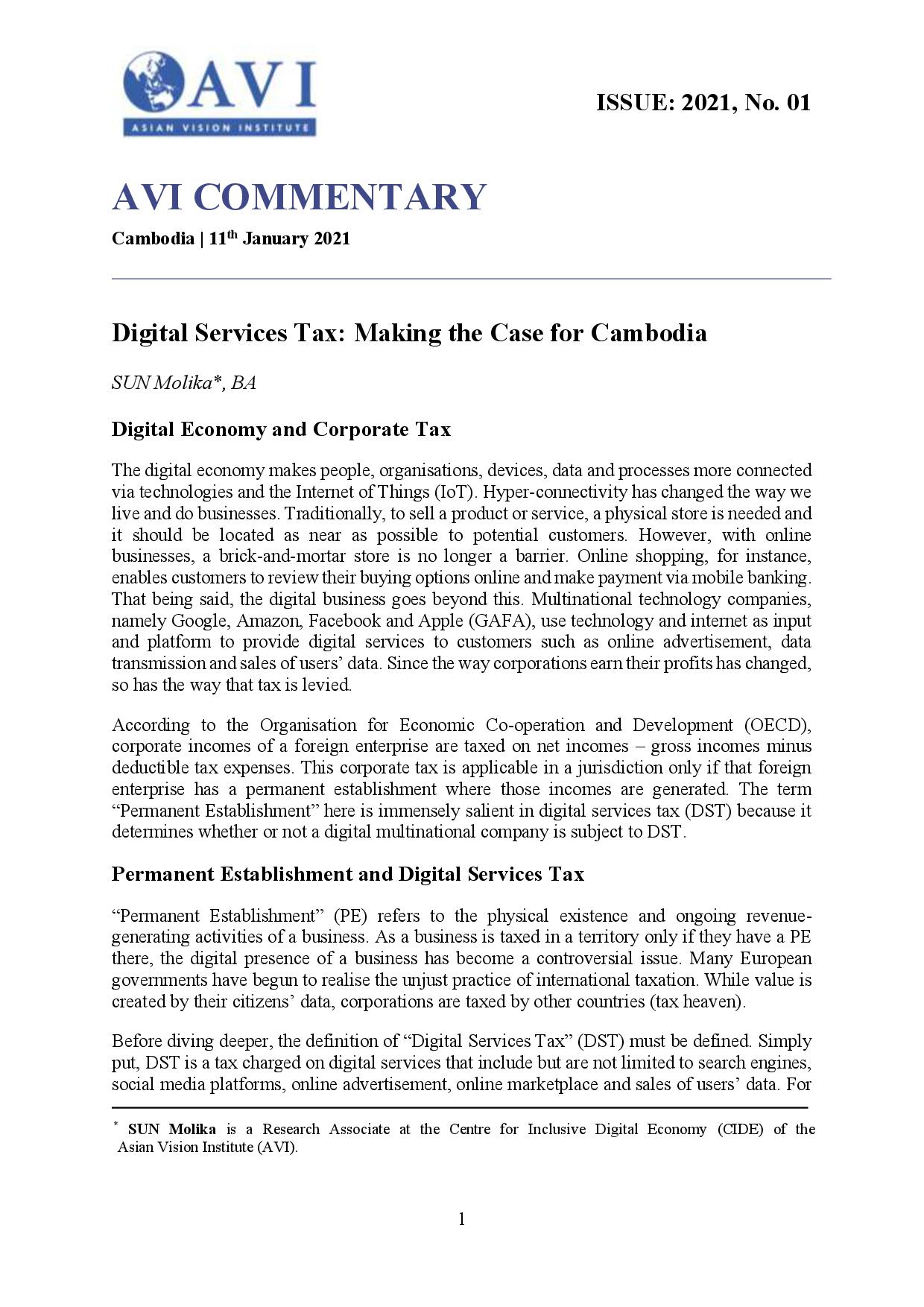 The digital economy makes people, organisations, devices, data and processes more connected via technologies and the Internet of Things (IoT). Hyper-connectivity has changed the way we live and do businesses. Traditionally, to sell a product or service, a physical store is needed and it should be located as near as possible to potential customers. However, with online businesses, a brick-and-mortar store is no longer a barrier. Online shopping, for instance, enables customers to review their buying options online and make payment via mobile banking. That being said, the digital business goes beyond this. Multinational technology companies, namely Google, Amazon, Facebook and Apple (GAFA), use technology and internet as input and platform to provide digital services to customers such as online advertisement, data transmission and sales of users’ data. Since the way corporations earn their profits has changed, so has the way that tax is levied.

According to the Organisation for Economic Co-operation and Development (OECD), corporate incomes of a foreign enterprise are taxed on net incomes – gross incomes minus deductible tax expenses. This corporate tax is applicable in a jurisdiction only if that foreign enterprise has a permanent establishment where those incomes are generated. The term “Permanent Establishment” here is immensely salient in digital services tax (DST) because it determines whether or not a digital multinational company is subject to DST.

“Permanent Establishment” (PE) refers to the physical existence and ongoing revenue- generating activities of a business. As a business is taxed in a territory only if they have a PE there, the digital presence of a business has become a controversial issue. Many European governments have begun to realise the unjust practice of international taxation. While value is created by their citizens’ data, corporations are taxed by other countries (tax heaven).

Before diving deeper, the definition of “Digital Services Tax” (DST) must be defined. Simply put, DST is a tax charged on digital services that include but are not limited to search engines, social media platforms, online advertisement, online marketplace and sales of users’ data. For example, an individual in France uses Google to search for a tourist accommodation in Monaco. Once the user clicks on the commercial promotion of a resort in Monaco, France would treat revenues generated by this online advertisement as a DST, even though this transaction happened merely between Google and the resort in Monaco. As DST becomes a trending phenomenon among many nations around the globe, is it legally right to do so?

International tax law stipulates that corporate tax is applied to where a product is created rather than where consumers are physically located. Although the digital economy has enabled businesses to earn profits in foreign countries, they are not subject to corporate tax if they do not have a physical presence in that jurisdiction.

Unlike corporate tax whose tax base is net incomes, DST is structured to tax gross incomes, which has been criticised as an inefficient and anti-growth mechanism. For companies with slim profits, taxing gross incomes will be a huge loss for them because other associated costs such as deductible tax expenses are not subtracted before tax calculation. Thus, newly emerging businesses with insubstantial capitals might be hit by DST and discouraged to join the market. More importantly, as explained by the OECD, it is impossible to separate the digital economy from the traditional one. More and more production lines are connected to the Internet, so distinguishing which line shall fall under DST become a complicated task. To settle the debate, the OECD initiated a series of negotiations on DST participated by more than 130 countries and decided to require multinational companies to partially pay their income taxes where their consumers are located.

The US’s Response and What to Expect

Since GAFA are originated in the United States, the US government will not stay quiet. After France decided to levy its DST on GAFA in July 2019, the US Trade Representative (USTR) investigated and found DST discriminatory under Section 301 of the US Trade Act of 1974. As such, the US is allowed to retaliate against this discriminatory action. To fight back, the US planned to impose $2.4 billion tariffs worth of cheese, cosmetic products, handbags and porcelain. Fortunately, this trade tension cooled down when France decided to postpone its tax collection to 2021 and kept working on the OECD’s taxation on the digital economy. Even though this is a positive sign, the future is not promising as long as DST is being developed and levied by European countries. Therefore, the conflict of interests between the EU and the US might create tension in multilateral trade communities and eventually hurt international trade.

Digital Services Tax and Its Implication in Cambodia

Digital Services Tax is a viable idea for Cambodia to consider, as the country is at its early stage of digital economy transformation. E-commerce is everywhere ranging from online shopping and online food delivery to digital payment and others. In 2020, 58% of Cambodian people are active social media users, and Facebook alone shared 58.6% of total online activities. Furthermore, in the context of the COVID-19 pandemic, Cambodian tax revenues are declining while public expenditures on healthcare and government subsidies rise. Therefore, adopting a DST will be an additional source of tax incomes that helps the Cambodian government cope with current and future economic hardship.

Nevertheless, levying and collecting DST require a comprehensive feasibility study, strict compliance with the international tax system and well-rounded expertise to draft and implement this new tax law. Hence, Cambodia should keep track of DST regulations, especially those proposed and developed by the OECD, and learn from the success stories of other countries in implementing this new tax. 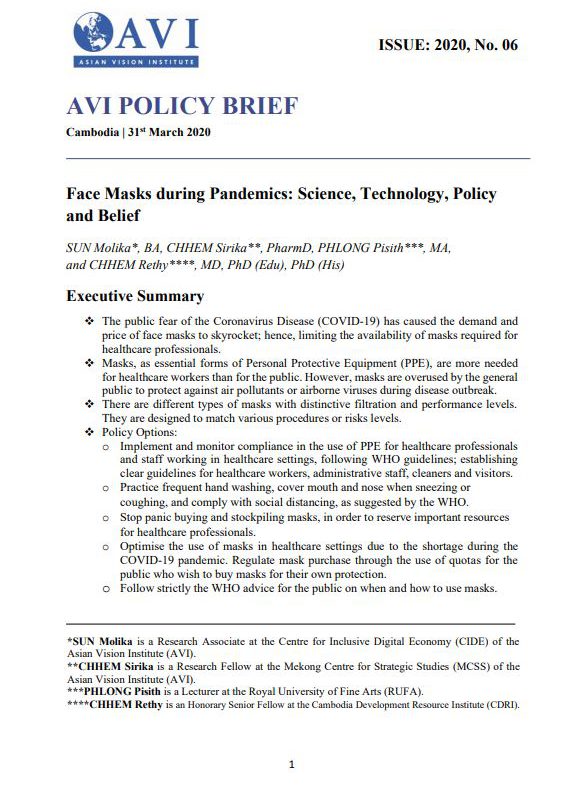 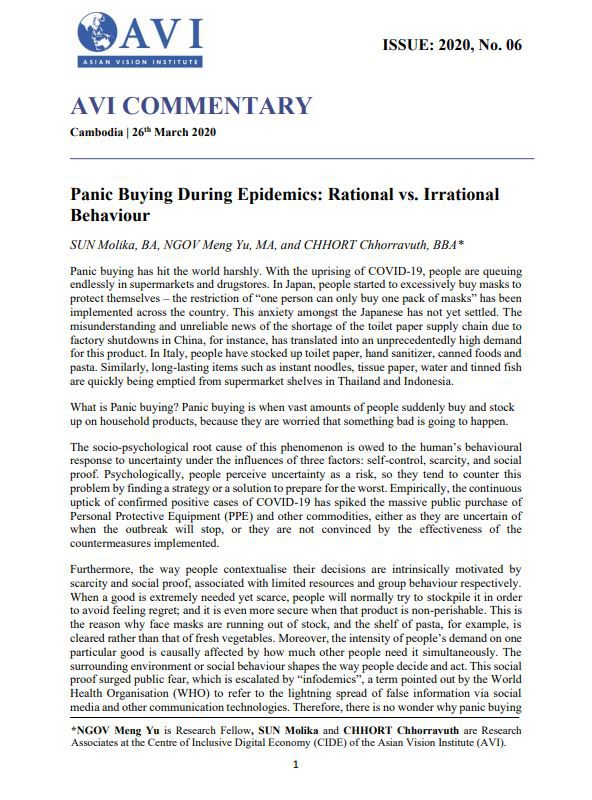