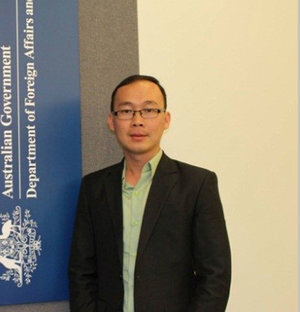 Mr. Lak Chansok is a research fellow at Asian Vision Institute (AVI). He is also a researcher at Democracy Promotion Center of Ritsumeikan Center for Asia Pacific Studies (RCAPS) of the Ritsumeikan Asia Pacific University (APU) in Japan and at Cambodia 21st-Century Maritime Silk Road Research Center (CMSRRC) of the Royal University of Phnom Penh (RUPP) in Cambodia. He used to be a lecturer at Department of International Studies, Institute of Foreign Languages (IFL), the RUPP (2012-2017); a research fellow at Cambodian Institute for Cooperation and Peace (CICP) (2012-2016); and a research consultant for Korea Global Development Consulting Center (KGDC) in 2013. He obtained his bachelor’s degrees in International Studies (with honors) and law from the RUPP and the University of Cambodia (UC) respectively in 2012. He was also awarded an Australian Awards Fellowship at the University of Queensland in Australia in 2015. He is a Ph.D. candidate and holds a master’s degree in Asia Pacific Studies (International Relations) from APU. His research interests cover Cambodia’s foreign policy towards China and Japan, soft power, the Belt and Road Initiative (BRI), and Cambodia’s transitional justice.