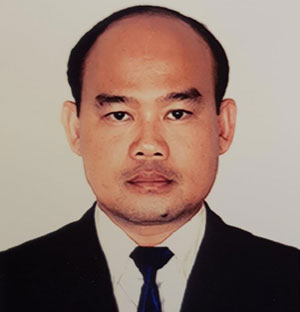 Dr. Hak Mao was born on 21 May 1983 in Takeo province. He graduated a Bachelor on Forestry Science at the Royal University of Agriculture in 2003. In 2008, he was awarded a Master of Science on Marine Environment and Ocean Management at World Maritime University in Sweden. Luckily, in 2015 he was awarded another higher degree-Ph.D. on A Design of Low Carbon Development Action in Cambodia towards 2050 and pursued as research fellow until mid 2016 in order to develop a National Strategy on A Design of Low Carbon Development Action in Cambodia towards 2050. He has a strong and extensive experience on climate change. In addition, he has also participated in climate change negotiations for Conference of Parties on Climate Change. Besides, he has engaged with marine and coastal management and development nationally and internationally, notably the promotion of the development of blue economy and the implementation of maritime law—Law of the Sea and the International Convention for the Prevention of Pollution from Ships (MARPOL). He has worked as a part time lecturer at the Paññāsāstra University of Cambodia for more than three years. He is currently Director of the Department of Climate Change of the General Secretariat of the National Council for Sustainable Development/Ministry of Environment.